The Editors of the BJPS and the BSPS committee are delighted to announce that Grant Ramsey and Andreas de Block are the 2017 winners of the BJPS Popper Prize for their article ‘Is Cultural Fitness Hopelessly Confused?‘. Here is the citation from Editors-in-Chief Wendy Parker and Steven French:

Grant Ramsey and Andreas de Block’s paper, ‘Is Cultural Fitness Hopelessly Confused?’ (Brit. J. Phil. Sci. 68 (2017), pp. 305–28), addresses a hotly debated topic: can evolutionary theory be extended to human culture? Those who answer ‘no’ typically point to certain well-entrenched critiques of extending biological fitness to the cultural domain. However, as Ramsey and de Block point out, there is considerable uncertainty as to how biological fitness itself should be ‘modelled and measured’ and, while granting that great caution must be exercised in exporting this concept, they argue that the pursuit of a coherent and useful notion of cultural fitness is by no means a hopeless task. In particular, they note that certain problems that arise for this notion must also be faced by its biological counterpart. Having defended its tenability, they then map out a more positive conception of cultural fitness by carefully considering how the core elements of biological evolution align with those of cultural evolution, while acknowledging the relevant differences between the two domains. In particular, by shifting the focus of individuation from memes to organisms, and tying cultural fitness to the latter rather than the former, they show how it ‘can do similar work in the study of cultural evolution as biological fitness does in the study of biological evolution’ (p. 324). Overall, this yields a sophisticated and nuanced account that sheds new light on and further advances a major contemporary debate. As such, this paper is, in the opinion of the Co-Chief Editors and the BSPS Committee, a worthy recipient of the BJPS Popper Prize for 2017.

The BJPS Popper Prize is awarded to the article judged to be the best published in that year’s volume of the Journal, as determined by the Editors-in-Chief and the BSPS Committee. The prize includes a £500 award to the winner(s). More information about the prize and previous winners can be found here. 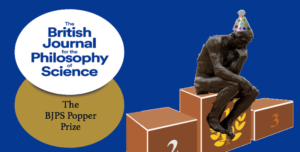