[UPDATED] Peer review or perish: The problem of free riders in philosophy

As any journal editor will tell you (at length, possibly via the medium of rant), the trickiest part of the job is not the papers, not the authors, and not even the typesetters. It’s the referees. It is no mean feat to secure referees who are, first, reliable in their academic judgement, second, responsive to emails, and third, willing to return reports when they say they will. But the frustrations of editors aside, the far more pressing concern is for the career prospects of early-career researchers. Jobs and funding can depend on timely decisions. Indeed, whether an early-career researcher gets to become a mid- or late-career researcher can depend on whether a decision is made in a reasonable amount of time.

Common bad behaviour from referees includes (but is not limited to!):

Opinions differ on the obligations of academics as referees. Is it unpaid labour, an act of charity towards the community that ought only to be gratefully received? As much a part of the job as teaching and writing? Something in between? Whatever the answer, authors need more from referees than they ever have done; more depends on papers being reviewed in a professional, timely manner. And at the very least, there’s a ‘pay it forward’ case to be made: A paper sent to the BJPS that isn’t desk rejected can be expected to be read by at least six people (and that’s not counting the work that goes into any resubmissions). For every paper an author submits, other people have attended to their work in detail. The author, qua referee, might be expected to return the favour.

I’ve been lucky to witness some extremely productive philosophical engagement between authors and referees. When it’s good, it’s so good. The only shame is that so much of this is hidden. The process viewed en masse—the view one gets as an editor—is primarily one of cooperation and collegiality, and it’s a wonder that puts the lie to the notion of philosophy as anything like an individualistic endeavour.

But what to do about the bad referees, the system’s free riders? Relentless pestering and various forms of emotional blackmail fall on deaf ears. At the BJPS, we operate a flag system for persistent offenders, but all this amounts to is bad referees being asked to perform fewer reviews, while good referees carry more of the load.

So here’s a radical suggestion, using the only weapon motivational device editors have: If someone fails to fulfil their duties as referee, the journal will not accept submissions from that referee, for some period of time to be determined. The time period should reflect the severity of the dereliction of duties. For instance, agreeing to act as a referee but then disappearing off the radar might warrant the most substantial ban. Delivering a meagre report that’s extremely late, and without communicating with the relevant editor about the delay, might mean some shorter period of time on the bench. First-time offenders surely deserve different treatment to persistent re-offenders. And the embargo period will need to be substantial enough to be effective (too short and it will have no real impact; too long and it’s probably not practical due to the changes in the editorial team). The details can be ironed out.

It’s not just badly behaved referees that stand to suffer here. There’s a risk for the journal in question too: bad referees aren’t necessarily bad authors, and we risk losing good papers to other journals by refusing those authors’ papers. But the problem is so rife and its upshot so dire for early-career researchers that maybe something more radical is required to make clear what is expected of referees and ameliorate, at least to some degree, the problem of free-riders. All thoughts on this proposal very welcome!

‘I decided to go on holidays’ and ‘I have other deadlines that I decided to prioritise after agreeing to referee this paper’ are the problems, not the excuse. On the other hand, there are perfectly good reasons to be delayed in returning a report. Not only do we understand, we’ve been there. You are not the droids we’re looking for.

Thanks to everyone, here and elsewhere, for their feedback—it’s been really helpful. I thought I’d add some clarifications to the original post and respond to some of the alternative suggestions. Some concerns stem, I think, from the thought that we’re concerned with a wider set of behaviours than is the case. Some alternative suggestions can’t be accommodated for ethical or practical reasons. I’m sure I haven’t covered every issue here, and so very happy to receive more feedback.

Finally, there is presumably a reward for referees already in operation: a referee’s work is, in turn, reviewed by their peers (maybe in the same journal—in my original post, I mentioned that six people tend to any one BJPS paper that is not desk rejected—or maybe elsewhere).

Again, we’re very happy to hear more thoughts on this and to answer any questions I’ve left unanswered! 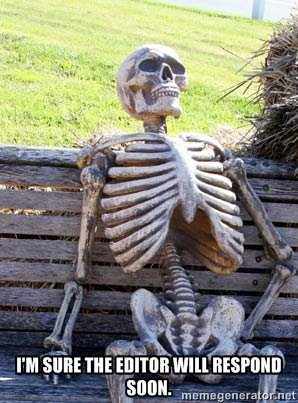 It’s not the despair, Laura. I can take the despair. It’s the hope I can’t stand.